What is Bitcoin? Why is bitcoin’s price so high?

Of late there has been a lot of debate and questions stirring among the vast majority of the population on Bitcoin. It was first introduced in the world of the virtual economy some five years ago. Since then there had been a constant source of curiosity and confusion over Bitcoin. 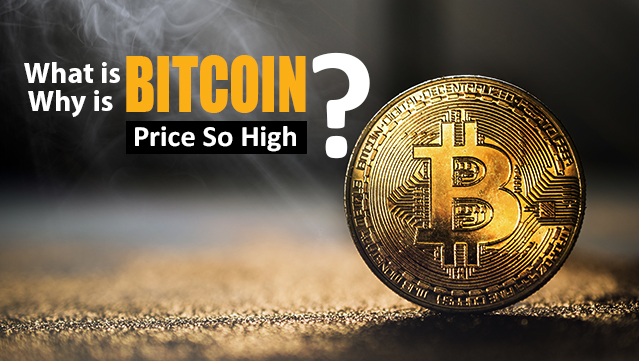 Before we get into the details of Bitcoin and its soaring prices lets first understand the meaning of Bitcoin.


Bitcoins are nothing but are the cryptocurrencies which mean virtual cash which is typically stored in the online wallets. Online wallets such as Paytm, Ola Money etc, which you can anytime use to buy any product or services.

Bitcoins are the oldest and most popular form of cryptocurrency which behaves really like any currency which is there in the economy except the fact that it is not tangible and is decentralized. It can not only be used for any kind of purchases but also can be used as an investment tool or can be used for trading purposes. In short, it is also known as BTD similar to INR for Indian rupee.

How it gained so much of popularity is still unknown or for that matter, any cryptocurrency is still anonymous. Despite all the transaction data being in public view still, the people involved in such kind of transactions are never revealed. This is the reason that it attracts lots of people who try to evade Tax are launders money.

In recent times the price of Bitcoin has risen tremendously as a result of which many minor players have got massive gains and the major players have almost become millionaires. However, no one knows that whether these gains are for real or is just a bubble that can burst at any point in time.

The currency value of bitcoin is determined in the same manner as is done for any other currency. It is also based on the same rule that is how much people are willing to buy in exchange for it. In order to make any transaction through Bitcoin the first step which is to be followed is “Mining”. This takes place in a computer system and in that computer, a complex mathematical problem which has a 64 digit solution is to be solved. As one problem is solved, one block of Bitcoin is processed and as a reward, the miner gains one new Bitcoin.

To create a balance in the virtual economy and to deal with the expanding power of computer chips the complexity of the puzzle is adjusted which ensures the steady stream of the new Bitcoins which are produced every day. At present, there are about 16 million Bitcoins in existence.

There are certain Bitcoin protocols that are to be followed and which makes the market for Bitcoin work. Technically maximum of only 21 million of Bitcoins can be created by the miners.

The price of the Bitcoin has driven this primary theory which tells that Bitcoins will be soon be benefitting by the huge money injections by big investment institutions by the introduction of future BTC products which will allow investors to go for long and short Bitcoins.

Another reason for its rise in price is due to few investors that use Bitcoin as store value and do not sell it and at any current price.