Intelligence is the biggest gift of the man and that makes it stand out of the living beings. With the help of this intelligence, it has invented many types of simple and complex technologies.

Experts have innovated Artificial Intelligence system which is capable of identifying a range of human emotions; present in the human speech right from happiness to disgust.

Since long the computers used to convert the human speech into text form. However, the humans can’t do without emotions and this factor was missing in the text that was converted from speech. Neural networks are the main link that processes information from one source to another and are also capable of learning, analysis, and synthesis. This kind of a system overtakes the traditional algorithms and in this case, the communication between a human being and computer becomes more collaborative. 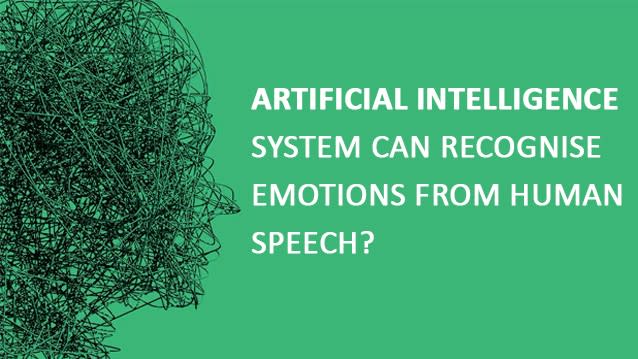 Scientists have innovated a new technology its kind called Artificial intelligence which can identify a spectrum of emotions- from happiness to sadness through human speech. Initially, computers were successfully converted human speech into text excluding the emotional component from it.

In Russia, the National Research University Higher School of Economics have trained a neural network to identify about eight different type of emotions: neutral, calm, happy, sad, angry, scared, disgusted, and surprised. Apparently, in almost 70% cases the computer identified the exact emotion, as claimed by the researchers.

These investigators have transformed the sound into images spectrograms which permitted them to work with sound using the methods applied for image recognition.

This entire research was done with a Deep Learning approach. This approach builds a “neural network,” which is somewhat similarly modelled on the human brain. About hundreds of thousands of neurons are organized in different layers and each layer transforms the input, for example, it automatically identifies a facial image at a higher level of abstraction, based on the set of edges at certain orientations and locations.

The AI’s of this generation are highly competitive in tasks thanks to the increase in data availability for the computers to learn from along with their enhanced processing power.

Artificial Intelligence has even the ability to recognize other things such as faces, sketches into photos, speech and play Go.

It is also used in identifying criminals by the investigating team. Researchers have lately developed an Artificial Intelligence which enables to judge whether a person is a criminal or not just by looking at their facial features. This system was evaluated with the help of a database of Chinese ID photos and the results were astonishing. However one can’t totally rely on the AI as there have been cases that it has mistakenly categorized innocents as criminals in some 6 percent of the cases, while it was able to successfully identify around 83 percent of the criminals. This indicates a staggering overall accuracy of almost 90 percent.