Are Apps Going To Replace Websites?

The use of mobile phones have taken over a large portion of our daily activities. For any kind of information, people go to their cell phones instead of opening their laptops. From sharing photos, videos or digging out business details or offhand mobile browsing mobile has become a handy tool. As the world is devoured by digitization this new economy is revolving around mobile. 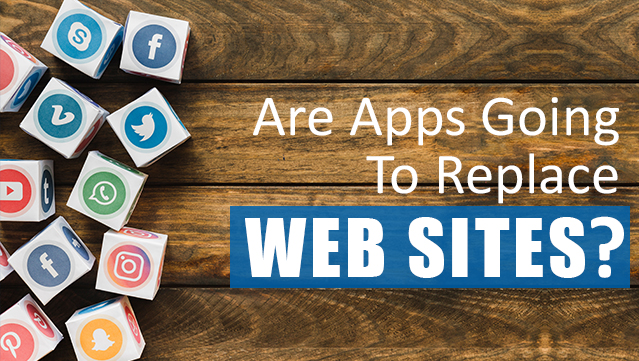 With the onset of cloud services, there is virtually limitless flexibility and storage of data. This has rendered a massive boost to the mobile revolution especially in the development of mobile apps.

Tech savvy people have explicitly advocated the notion that the frequency with which the mobile apps are used it may soon out pass the web in due time. However, the fading out of web per se is more about moving towards a paradigm shift wherein the web can be accessed. In fact, mobile apps development will be all about chasing this shift in the web interface. Which implies that a user can directly get their thing done such as booking tickets ordering food or availing any banking services without opening a web browser.

The era of computer started with TV like desktops then came laptops which were easily carried from one place to the other. Now that has been replaced by tabs and mobiles which are handy and smaller in size to carry with comfort. This progression from mainframe to mobile phones advocated that a device can be powerful and fast yet be smaller in size.

Keeping these change in mind the websites have to make a shift to mobile design hinting towards a possibility of running out of functionality. To get the right kind of responsive website within a reasonable budget is a tough task. It requires numerous conversions and upgrading mechanism which most developers face while developing a website. The challenge does not end here; as App or website development is a based on customer’s feedback. Mobile apps has gained the momentum in the market due to its functionality and specificity.

Even if technologies like HTML5 looks promising for web-based mobile apps that run smoothly across the basic web browsers, yet most mobile app developers accept the fact that web apps can soon be combined with inherent code and can be developed on app stores like any other native app.

Technically Yahoo or YouTube runs compatible on the Mobile Windows because they detect that you are using a mobile version of Internet Explorer. The function of smartphones is dependable on the kind of operating systems used and the type of hardware. At present Java run quietly efficiently on the mobile devices. The designing of a web requires a combination of Java and other third-party solutions to support the modern web. Hence the solutions should be flawless when used on the operating systems.